I was back to working on a marketing page and so I had a giant uncompressed image in my doc. After uploading it (which didn’t break, thank you!) I nonetheless realized it was slow and I decided I should go ahead and make the image smaller to make the document easier to work with. I replaced the TIFF with a lower quality and resolution JPEG, then re-uploaded the prototype, which failed with this error message. I tried again and then it worked. So I don’t know if any of that preamble is important, but I mention since as you know we’ve had large image upload problems in the past (though in this case, the failure happened with the absence of a large image). I don’t know if you can impersonate my account but here’s the prototype if you want to dig through version history: Antetype Cloud

At the least, maybe a better error message is in order if possible (or maybe it just means “it failed” I don’t know). 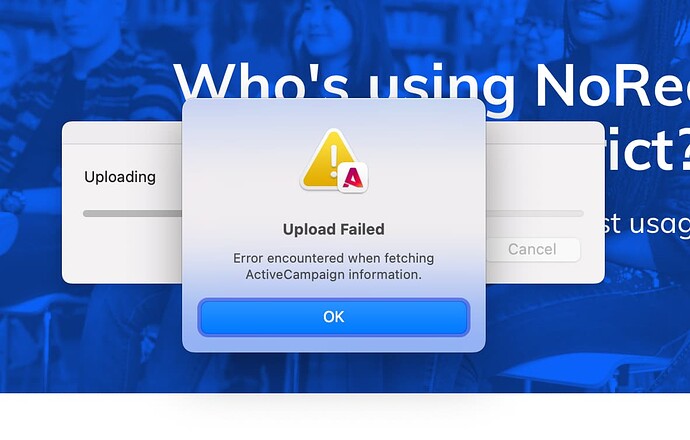 Did you simply cancel the first upload with the uncompressed TIFF before uploading again with the JPEG? If so, you might have received an error message for the first upload while the second upload is processing. Right now there is an issue with large file uploads throwing delayed error messages like the one in the picture.
Apart from that, were you able to upload the same file after the issue (with the compressed image)?

I might have canceled, that would make sense. Like I said, it worked right after I tried again after it failed.