I would like to know the distances between elements. For example, like in the Sketch plugin “Measure”, by selecting an element and hovering others.

Just this tiny feature would reduce my specification time to half!

Thanks for your time! 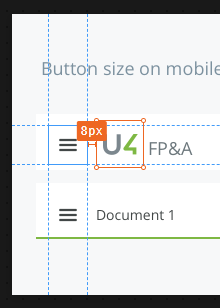 I don’t know how this is done in other programs but Antetype uses both padding and margin. Combined with any number of nested elements - what good would it do to know the distance between two elements if it could be caused by any combination of the two plus any conceivable overlap? I’m not saying your request isn’t valid I just wonder how it could be implemented given Antetype’s structure.

True. I didn´t see this property in the inspector, to be honest. Maybe this is enough.
Thanks!

We are currently implementing it in the web viewer. Maybe you can play with it sfter the next update. I share Stephan’s opinion, but many users like to see the distances that way

In the future a grid and guidelines would be nice.

If you need something now, I cannot recommend XScope enough. It really is something I could not live without.

@Carlos_Perez_Ortola we just released an update with the new measurements in the Web Viewer: Update with new Distance measurements and a lot of fixes…

What do you think?

Thanks for asking!
I discussed with developers how I should specify. Apparently adding components that have their own paddings and margins is better for them, so that they don´t have to tweak every distance, and they can build by just combining pieces of Lego.
Since I will adapt the way I build prototypes and specifications to this, I guess the total distance between two elements is not that important: I made a feature request for the wrong reasons :).

thank you for your feedback, and bringing up the feature request nonetheless

I am with your developers, but we had a lot of requests for measurements …