Is there an obvious way to hide cells or widgets on mobile? Some scripts like these here (the bottom one) don’t work on mobile browsers so I would like to hide the objects altogether.

define a breakpoint and either wrap the element in a new widget with visibility set to “collapsed” in the breakpoint (or use an existing widget, and add a breakpoint-state): 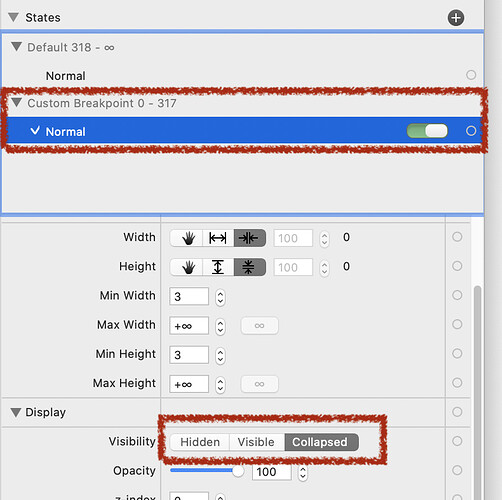 This is currently the only way to use a media-query …

That works, thanks! Break points behave erratically when in In-Place mode but they work in the Web Viewer.

if you have a file where it doesn’t work in In-Place (or inside Antetype): let us know. The only known issue is: after resizing the screen repeatedly Antetype gets slower

The states are not shown correctly in Antetype but the breaks work perfectly on the exported web viewer. I’ll prepare a minfied example later which shows the issue!