When copying and pasting widgets from one document to another, the following prompt is issued: 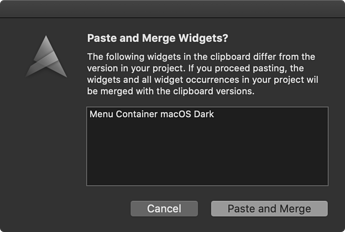 Tiny typo there as well: “wil be merged”

Do you mean the properties, or content of “individual content”-cells? For properties it would only work if the hierarchy of the widgets are the same, or am I missing something?

We also need “Keep Both”. I am just trying to paste parts of one prototype into another prototype and my widgets are creating mayhem. Some seem to be merging but some are applying the new style to the local widgets. I would basically just like to be able to copy and paste without worrying about widgets.

Maybe there is a better way though? How do you guys do it? The scenario is easy to explain:

I design a menu, call the widget “menu”. Then I reuse that menu in a new project but I add an icon. Also, I rename it and call it “menu with icon” to keep track. When I copy and paste something that has a few of these copied and renamed objects in it, the names that I get in the “Paste And Merge” Dialog don’t match the names of the objects that I am pasting because that uses the original widget’s name. So I go for it and paste and now I have icons in all the menus that I don’t want to have icons.

Does that make sense?